America Is All In Report Calculates that Bipartisan Infrastructure Law And Federal EV Tax Credit Alone Are Not Sufficient to Meet U.S. NDC Target

WASHINGTON D.C. & NEW YORK — Exactly one year after the Biden administration announced its goal to cut greenhouse gas emissions at least 50 percent by 2030, America Is All In released the first in-depth look at how the U.S. can solve the biggest and fastest-growing piece of the U.S. climate puzzle: carbon emissions from the transportation sector. The results are both promising and challenging: the U.S. is poised for major breakthroughs to reduce pollution from transportation, particularly through electrification of road transport, but recent and pending congressional legislation is insufficient; increased independent federal and local government leadership is required. The report, titled An “All-In” Pathway To 2030: Transportation Sector Emissions Reduction Potential, reveals that the transportation sector can deliver one-fifth of the emissions reductions needed to successfully reach the Biden Administration’s climate target of 50-52 percent reductions by 2030 from 2005 levels. This reduction is significantly more progress than previous analyses had identified. With continued and accelerated efforts from cities, states, businesses, and the federal government, transport emissions could reduce by 34 percent, or over 600 million metric tons of CO2 (MtCO2), through the remainder of the decade. “Transportation is the single biggest contributor to U.S. carbon pollution, so if we’re going to meet our short-term climate goals, we’ll need bolder and faster action,” said Michael R. Bloomberg, co-chair of America Is All In and U.N. Special Envoy for Climate Ambition and Solutions. “By following the road map in this new report, cities and states can play a crucial role in speeding up our climate progress– and showing where the rubber meets the road when it comes to reducing U.S. emissions.”

Since announcing the U.S. climate target, or Nationally Determined Contribution (NDC), new federal transport policies have been developed and passed. For example, the Infrastructure Investment and Jobs Act (IIJA), commonly referred to as the Bipartisan Infrastructure Law, will lead to wider deployment of charging infrastructure. Today’s report shows that this legislation, which Congress passed in November, will enhance the rate of deployment of low-carbon transportation, but it is unable to deliver the necessary emissions reductions within the transportation sector on its own. Combined with current policies, the report shows how these measures would deliver over 300 MtCO2, but this is only half of the transportation sector reductions needed to hit the 2030 goal.

Rather than reduce emissions directly, the IIJA aims to set up the infrastructure needed to enable critical energy system transformations, including the deployment of half a million electric vehicles. The U.S. transportation sector could be set on a pathway to reach the overall U.S. target with additional action from Congress in the form of tax credits, investments, and other strong climate actions; new legislation and implementation from cities, states, and businesses; and new and enhanced federal emission regulations. Today’s report details this set of policy pathways—and shows how they add up to reduce overall transportation emissions by 34 percent in the next eight years—helping to deliver a cleaner and healthier transportation fleet.

Here’s what that pathway to 34 percent transportation emissions reductions looks like:

● The Bipartisan Infrastructure Law and current policies from all-of-society get us 19 percent reductions from 2005 levels—over halfway towards the U.S. goal.

● Congress can achieve an additional 3 percent of emission cuts by passing a $7,500 federal EV tax credit.

● City and state governments, along with businesses and civil society, can contribute 5 percent through zero-emission vehicle mandates, municipal EV fleet targets, and vehicle miles traveled targets—now we’re nearly ¾ of the way towards the goal.

● To get over the finish line, the final 7 percent of reductions would come from federal regulation on heavy-duty vehicles, increased next-generation biofuels, and more stringent CAFE standards.

“One year ago the United States put forward an ambitious vision to grow our economy, lead internationally, and build a better America, all while doing our part to address climate change domestically,” said Prof. Nate Hultman, the corresponding author for the report and Director of the Center for Global Sustainability at the University of Maryland. “We always knew that rising to the climate challenge would be difficult. But as this report underscores, we have already made real progress within the transportation sector. Thanks to better fuel economy standards, state and local policies supporting cleaner transportation, and the recent infrastructure law, we are more than halfway to our transportation sector goals. Yet more will be needed from Congress to help deliver the rates of EV deployment and the power sector decarbonization needed to reach our climate goals—and keep global goals of limiting 1.5C alive.” 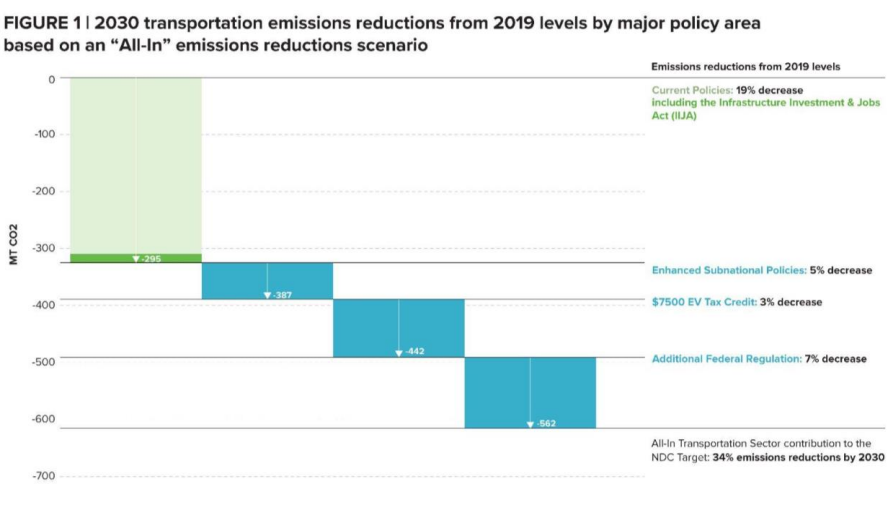 This analysis follows the Intergovernmental Panel on Climate Change's (IPCC) latest report, which said that the falling costs for renewable energy and electric vehicle batteries has slowed the growth of climate change over the past decade, but that deep and immediate cuts to transportation emissions remain necessary to avoid the worst impacts of climate change.

The report’s findings demonstrate that the U.S. goal of halving emissions by 2030 requires action at every level of government and across every part of society. While the Biden Administration implements the Bipartisan Infrastructure Law and Congress continues to work through the reconciliation package, strong leadership from cities, states, businesses, and civil society is critical to reaching our national climate goals.

Michael Berube, Deputy Assistant Secretary of Sustainable Transportation at the U.S. Department of Energy (DOE), welcomed America Is All In’s analysis: “This report’s deep analysis shows that we can—and we must—reduce carbon pollution from our transportation sector to meet our climate goals. We’ve already made great progress, and now is the time to accelerate action by expanding access to electric vehicles and getting cleaner trucks and heavyduty vehicles on the road—which means good-paying jobs, less money spent at the pump, and a cleaner, healthier planet.”

Carl Pope, senior advisor to United Nations Secretary-General’s Special Envoy for Climate Ambition and Solutions Mike Bloomberg and former CEO and chairman of the Sierra Club added: “New California rulemaking on EVs shows that American society is steadily increasing its clean energy ambition—and not waiting for Washington's permission. This new report is thus an underestimate, even as it demonstrates how bottom-up action slashes emissions and delivers on climate action. And nothing reported here burdens our economy or reduces our security; it's all part of prosperity and safety through clean energy innovation.” This paper and analysis was led by the Center for Global Sustainability (CGS) at the University of Maryland, along with support from RMI and World Resources Institute. These three organizations represent the analytical team of America Is All In. Visit www.americaisallin.com to access previous reports and analyses.

About America Is All In

America Is All In is the most expansive coalition of leaders ever assembled in support of climate action in the United States. Mobilizing thousands of U.S. cities, states, tribal nations, businesses, schools, and faith, health, and cultural institutions, the coalition is focused on pushing and partnering with the federal government to develop an ambitious, all-in national climate strategy that meets the urgency of the climate crisis; scaling climate action around the country to accelerate the transition to a 100 percent clean energy economy; and promoting the leadership of non-federal actors on the world stage. Led by the U.N. Secretary General’s Special Envoy for Climate Ambition and Solutions Michael R. Bloomberg, Washington Governor Jay Inslee, Charlotte Mayor Vi Lyles, and CEO of CommonSpirit Health Lloyd Dean, America Is All In is driving a nationwide movement to cut U.S. emissions in half or more by 2030 from 2005 levels and reach net zero emissions by 2050, while guarding against the impacts of climate disruption. Alongside whole-of-government action on climate, America Is All In champions a whole-ofsociety mobilization to deliver the transformational change that science demands, with the goal of a healthy, prosperous, equitable, and sustainable future. To learn more or get involved, visit www.americaisallin.com and follow us on Twitter @americaisallin.

About the Center for Global Sustainability (CGS)

Through world-leading research and policy engagement, the Center for Global Sustainability (CGS) at the University of Maryland seeks to change the way that governments, businesses, and people see possibilities for ambitious climate action. Founded in 2016 in response to the need for thought leadership to support global climate goals, its analytical programs advance ambitious national and subnational climate strategies, fossil phase-out, energy innovation, finance, and other major priorities. CGS currently supports nearly 30 researchers, and also works with a rich community of collaborators around the world. CGS is housed within the University of Maryland School of Public Policy. Learn more at cgs.umd.edu.